Where are All the Quail in Texas?

The Reversing the Quail Decline Initiative is a joint effort between Texas A&M AgriLife Extension and the Texas Parks and Wildlife Department which provides resources for quail conservation in the state of Texas. Their monthly newsletter includes links to educational materials, news articles, information on upcoming events, and invitations to quail-relevant classes and programs. Here is a recent article.

As we head into 2018, it’s time to reflect on the 2017 Texas Quail Index monitoring efforts. Cooperators from counties all over Texas evaluate quail populations and resources in their area by conducting call counts, setting up dummy nests, catching images of predators using game cameras, scoring habitat, and counting quail along the roadsides. This new Wild Wonderings article summarizes the data we’ve collected. 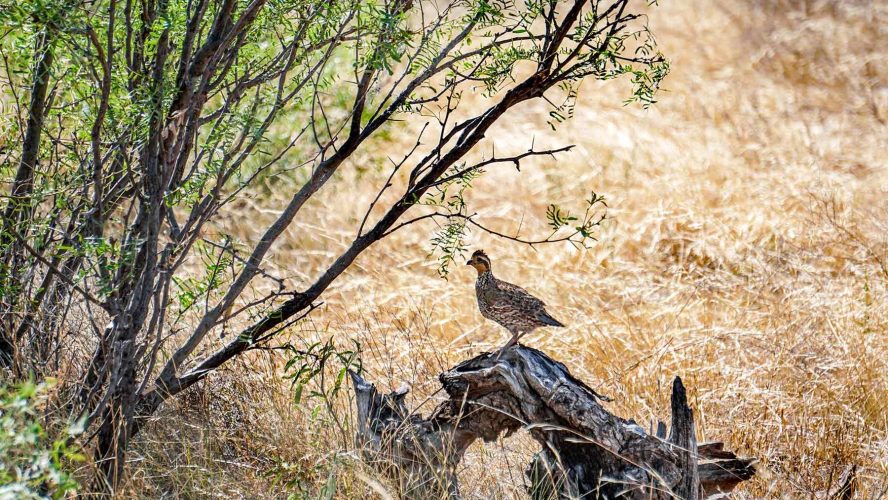 One question we’re suddenly hearing a lot over the past few months is: “Where did they all go?!” Many folks have commented that they saw plenty of quail over the summer, but the birds seem to have disappeared over the fall and winter. Hunting reports have been mixed as well, with some having decent luck and others feeling frustrated with this year’s crop compared to the exceptional seasons of 2016 and 2015. There are also a lot of hunters reporting suspiciously low juvenile to adult (J:A) ratios, which may indicate that chick production or survival were not as high this year as we might have hoped.

The J:A ratio is something you can monitor yourself if you go out during hunting season. By looking at a set of feathers called the primary coverts (pictured below), you can easily determine whether you have a juvenile or adult bird. See this helpful video for more information. As a general rule of thumb, the more juveniles you have, the better shape the population is in.

To answer the question of “where did they all go?,” we will have to wait and see. Weather may have been partially responsible for low numbers during roadside counts in the fall months, as several areas received rain that made getting around and observing birds difficult. On some properties, the birds might still be present but lying low (there are several TQI cooperators who consistently get skunked on their roadside counts, although other metrics indicate that there are quail there). There are also reports of high numbers of eye worm parasites this year which may be a contributing factor, especially in the Rolling Plains ecoregion where the worms are most prevalent. The low J:A ratios are also concerning, but it remains to be seen what impact all of this will ultimately have on quail in 2018.

It’s important to remember that quail populations follow a “boom and bust” pattern and that a dip in the numbers isn’t necessarily concerning. What we’re trying to address in the Reversing the Quail Decline Initiative is the long-term trend of declining quail numbers.