1
Dempsey Creek Ranch offers one of the most competitively priced cattle ranches in western Montana at approximately $8,300 per Animal Unit. Together with its scenic and recreational qualities, it represents an extraordinary value for the discerning buyer. In today’s market, with agricultural commodity prices rising steadily, the Dempsey Creek Ranch offers an excellent opportunity to purchase a productive agricultural operation in an asset class that has demonstrated stable valuation over extended periods of time.

Keith joined Hall and Hall in 2008 after spending 13 years developing land conservation agreements with rural landowners across the west. His work experience includes positions such as VP of Lands for the Rocky Mountain Elk Foundation and Director of Land Conservation for The Nature Conservancy in Wyoming. The close relationships required to conduct large, complex conservation transactions gives Keith an intimate understanding of the deeply personal values that each person brings to their ownership plans. Keith was introduced to the outdoors at age 11 with a week-long backpacking trip in the White Mountains of New Hampshire. Since then, hunting, fly-fishing, trail running, telemark skiing, and a host of other front and backcountry pursuits occupy his off-work time. Keith’s undergraduate degree is from Rutgers University and he holds a Master of Science degree from the University of Washington, College of Forest Resources in Seattle, Washington. Keith is currently licensed as a real estate broker in Montana (Lic. # RRE-BRO-LIC-24701), Idaho (Lic. # BR45550), Pennsylvania (Lic. # SB065661), and Nevada (Lic. # 1002058).

Positioned on the northern flank of the Flint Creek Range with panoramic views of snow-capped peaks and the upper Clark Fork River Valley, Dempsey Creek Ranch is rated as a 350-head productive cattle operation with abundant irrigation water that originates in high mountain lakes and top tier recreational amenities. The ranch consists of 2,363± acres in one contiguous block that borders Deer Lodge National Forest and State of Montana lands. Good hay production from pivot, wheel line and flood irrigated lands combined with healthy native range balances the livestock operation. Dempsey Creek provides an enjoyable recreational fishery while outstanding hunting for elk and whitetail deer round out this offering. This property is being offered in two configurations.

The Dempsey Creek Ranch is approached from the east along well-maintained county roads. From the Interstate 90 frontage road about five miles south of Deer Lodge one turns east onto Sager Lane, continuing onto Dempsey Lake Road. Meandering alongside irrigated fields and open pastures, one arrives at Perkins Road a few miles later. Continuing easterly, the ranch boundary is reached a quarter of a mile later at its southeastern edge near the owner’s residence. The Perkins Road continues northeasterly with a small, private ranch road breaking off to the north that provides access to the primary hay meadows that are perched on a bench overlooking Dempsey Creek. This field is irrigated by a pivot system installed in 2007. Perkins Road eventually crosses the ranch’s northern boundary before bending south and re-entering the property near Dempsey Creek. From there a variety of private ranch roads wander across the lower sub-irrigated pastures along Dempsey Creek and climb the foothills of the Flint Creek Range to the west, eventually leading to United State Forest Service lands. The lower elevations of the property are dominated by sub-irrigated meadows and willow covered bottoms, while the upper reaches are characterized by rolling foothill terrain, small spring-fed creeks, a couple of small “pothole” lakes and slopes with timber and open parks.

Dempsey Creek Ranch offers one of the most competitively priced cattle ranches in western Montana at approximately $8,300 per Animal Unit. Together with its scenic and recreational qualities, it represents an extraordinary value for the discerning buyer. In today’s market, with agricultural commodity prices rising steadily, the Dempsey Creek Ranch offers an excellent opportunity to purchase a productive agricultural operation in an asset class that has demonstrated stable valuation over extended periods of time.

The Dempsey Creek Ranch is located in Powell County which is an easy 10 minute drive from the town of Deer Lodge, Montana (pop. 3,517) and 25 miles from Butte (pop. 31,633). Both Delta and Alaska Airlines provide direct flights to Butte through their subsidiaries, SkyWest and Horizon from Salt Lake City and Seattle respectively. Missoula, 90 miles to the west, offers daily flights from Delta, United, Horizon and Allegiant Air with direct service to San Francisco, Los Angeles, Las Vegas, Minneapolis, Salt Lake City, Seattle, Denver and Phoenix.

The ranch is located in a broad mountain valley created by the Clark Fork River, a major tributary to the Columbia River. Above the valley, multiple mountain ranges rise to snowy heights including the Flint Creek Range, the Garnet Range and the Pintler Range capped by the continental divide. The “neighborhood” is dominated by working ranches and large blocks of public land managed by both the federal government and the State of Montana. The area is also rich in history. From the early days of Montana’s mining boom to the creation of cattle empires that gave birth to and defined the American cowboy, the upper Clark Fork Valley offers landowners the opportunity to carry on a historic western legacy. The nearby Grant-Kohrs Ranch was recognized in 1972 by the National Park Service as worthy of preservation to provide an understanding of the frontier cattle era and is managed to this day as a National Historic Site. Both Deer Lodge and Butte offer an array of services, including a private hospital, hotels, restaurants and K-12 public schools.

The ranch elevations vary from a little under 5,000’ to over 6300’. Average summertime highs are around 80 degrees while winter lows average in the low teens. Average annual precipitation: 13”.

Improvements on the Dempsey Creek Ranch are modest, functional structures consistent with its heritage as a working agricultural operation. In addition to the improvements described below, there is an additional building site with established well and septic. Owner’s Residence – Estimated at 3,232± sq. ft. The five bedroom, three bath owner’s residence was completed in 2001 with 1,696 sq. ft. on the main level and 1,536 basement that is finished with the exception of a small utility room. With large picture windows facing westward and the snow-capped peaks of the Flint Creek Range, the home offers a commanding view of the ranch. A large river rock fireplace offers the perfect venue for recalling hunting memories and display of the many shed antlers found on the property each spring. This home and 20 acres may be removed from the purchase for a reduction in price of $350,000. Managers residence – Estimated at 1,792± sq. ft. The Manager’s Residence is a three bedroom, two bathroom double-wide modular style home mounted on a permanent foundation with storage beneath. Hunting Camp The hunting camp is a simple wood stove heated A-frame cabin near the property’s west end nestled high in the mountain ground. It is “off the grid” and offers basic bunking accommodations in a dry, warm environment. Hunting Cabin – 725± sq. ft. The two bedroom, one bath hunting cabin offers rustic accommodations for hunters along Dempsey Creek at the base of the foothill terrain.All square footage estimates are per publicly available tax records and should be verified independently.

Rights to water from Upper and Lower Elliot Lakes that flows down Demspey Creek is the heart of the ranch’s abundant water. The ranch benefits from 39 separate water rights ranging from groundwater associated with wells to headgate diversions from a variety of creeks and springs. Priority dates as early as 1865 testify to the ranch’s historical significance and its agricultural heritage. This is an exceptionally well-watered property that has never run out of water, even in the driest years. Full documentation of water rights is available upon request.

Few ranches of this size boast the abundant wildlife populations that Dempsey Creek offers. Herds of up to 500 elk range freely between the United States Forest Service lands to the west and the large block of State of Montana land to the east, providing ample opportunity to view the movement of large herds of animals. The hunter or wildlife enthusiast will not be disappointed as 300-class bulls are routinely seen on the ranch. Large whitetail deer also inhabit the willow bottoms of Dempsey Creek and move daily between bedding areas on the creek bottoms and upland pastures ensuring that a rich variety of game is present on the ranch throughout the year. Bald eagles, golden eagles, black bear and a wide variety of other native Montana wildlife frequent the ranch throughout the year.

For the backcountry enthusiast, both motorized and non-motorized opportunities abound year-round on nearby Deer Lodge National Forest. An extensive network of trails and unimproved roads open to four wheelers, snow machines, horses and foot traffic lead up into the Flint Creek Range to the west. Numerous mountain lakes provide quality fishing on USFS lands, while the small stream fisherman will find ample diversion from populations of brook trout that sustain themselves in Dempsey Creek. The Flint Creek range itself starts at the western edge of the ranch and rises to peaks of over 10,000’ with dramatic alpine scenery, glaciated cirques and high alpine lakes.

The ranch has been operated as a working cattle ranch since it was homesteaded in the 1800s. The deeded acreage together with the USFS lease of 62 cow/calf pairs (June 15 – October 1) is estimated to support a 350 animal unit balanced operation using a rotational grazing system that takes advantage of the ranch’s numerous cross fences. The irrigated pastures and hay fields produce more than adequate hay to provide winter feed for the herd making for a balanced year round operation with surplus hay sold as an additional revenue stream.According to the owner, the ranch produces around 1,200 tons of hay on approximately 800 irrigated acres at the 350 head stocking level. During the winter, cattle winter on creek bottom pastures where temperatures are milder and they are easy to feed, while they pass the summer and shoulder seasons rotating through a series of rangeland pastures, USFS lands and the higher foothill terrain of the ranch’s west end. 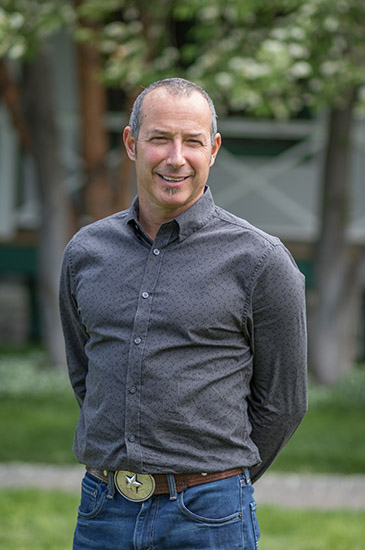