1
The Raths Ranch presents an opportunity for a buyer to own an expansive ranch in the middle of what is arguably some of the best elk hunting in the state of Montana. It is simple and inexpensive to operate and is situated less than 1 hour from Billings, MT. Surrounded by both recreational and traditional ranches, this is an affordable find in the coveted Bull Mountains.

Raised in Montana, as were his parents, grandparents, and great grandparents, Randy joined the Hall and Hall real estate partnership in 2007. Randy brings with him a background in the mortgage industry as well as over 30 years’ experience in real estate sales. He graduated from Gonzaga University with a bachelor’s degree in Business Administration with an emphasis in Finance. Randy and his wife KayDel have two children, a son, Sam who is a recreational ranch manager on 50,000 acres east of Billings, Montana and a daughter, Tessa who is getting her Master’s in Security Studies at Georgetown University in D.C. The entire family enjoys the fresh air and solitude of the Montana outdoors. His hobbies are team-roping, hunting, and fishing. Randy has volunteered time coaching kids’ athletics and volunteering for hospice. Randy focuses on the plains and mountains of eastern Montana and northeastern Wyoming from Hall and Hall’s corporate headquarters in Billings.

SOLD
Back to List
1 Photo View Interactive Map Save Property

Located approximately 8 miles west of Roundup and 60 minutes from Billings, the Raths Ranch is an outstanding elk hunting property in the highly touted Bull Mountains. The 3,200± deeded acre sporting property, which also includes a 640± acre state lease, has been leased for its abundant grass and managed for its trophy elk. Along with elk, whitetail deer, mule deer and Merriam’s turkey can be found throughout the ranch utilizing the habitat characterized by ponderosa hills, sandstone outcroppings and grassy meadows. The property is unimproved, offering a new owner dominion over the size and scope of any improvements.

The Raths Ranch is unimproved and blocked together with the addition of a State grazing lease. The ranch encompasses approximately 5 square miles and enjoys views of several mountain ranges, the surrounding ponderosa foothills, sandstone rock outcroppings and grassy meadows. The dryland meadows are located in the wider portions of the valleys and produce strong grass in the good years. Access to the property is via Golding Creek Road, a paved state road that borders the ranch in a north/south direction. Good private roads access the higher elevations on the ranch providing access to the more intimate and picturesque landscapes. Water is located throughout the ranch and helps create a diverse habitat which provides a sustaining environment for all kinds of wildlife.

The Raths Ranch presents an opportunity for a buyer to own an expansive ranch in the middle of what is arguably some of the best elk hunting in the state of Montana. It is simple and inexpensive to operate and is situated less than 1 hour from Billings, MT. Surrounded by both recreational and traditional ranches, this is an affordable find in the coveted Bull Mountains.

The Raths Ranch is located approximately 55 miles north of Billings, Montana. The nearest town is Roundup, approximately 8 miles to the east. Access to the ranch from Billings is via paved state highway. Billings is the trade center for all of Montana and northern Wyoming and offers an airport that provides both commercial and private jet service. Roundup has an airstrip suitable for landing small private airplanes.

The Raths Ranch is located in an area consisting of medium to large range livestock operations. Many of these are owned by families who have ranched in the area for multiple generations or ranching families who have moved in from other areas to take advantage of the world class hunting and cheap operating costs. The ranch is located in the Bull Mountains and while some subdivision has occurred nearer to population centers, the vast majority of “the Bulls” is under the solid stewardship of ranching families. According to historians, Roundup was so named because ranchers found the valley near the Musselshell River a natural place to“round up” their cattle in the fall of the year.Some say it was named because it was the ending point of the Texas Trail cattle drives into Montana. Today, Roundup is still a cow town centered on serving the agricultural enterprises in the area in much the same way that it did in the late 1800s. There are a myriad of activities to enjoy in the area such as visiting Roundup’s historical museum, playing golf at Pine Ridge Country Club or taking in the many rodeos. Additionally, there are many social and cultural activities in Billings, Montana’s largest city, 45 minutes to the south. Billings is a major agricultural center and offers fine dining, banks, automobile dealerships and one of the most respected medical centers in the northwest.

Precipitation on the ranch averages 12-14 inches of moisture including winter storms. The growing season is approximately 125 days in the lower elevations and roughly 100 days in the higher upland ranges.According to usclimatedata.com, the average high temperature in January is 36 degrees while the low is 11°. On average, the warmest month is July with an average temperature of 87° and an evening low of 57°.

The ranch is unimproved. While there are no dwellings on the ranch, power is available throughout the ranch allowing a new owner numerous building sites.

There are 3 wells and a spring. These sources provide water for livestock and wildlife. Full documentation is available upon request.

All minerals appurtenant to the ranch and owned by the Sellers will be transferred to Buyer at closing.

Property taxes are to be determined. This ranch was formerly taxed as part of a larger holding.

The Bull Mountains were so named because of the bull bison that would call the area home when they were too old and no longer able to keep up with the migrating herds. Today, the old buffalo are gone, having been replaced by an ever-increasing number of elk. The Raths Ranch is a prodigious hunting ranch which has been managed for the propagation of elk and deer. The largest elk harvested on the ranch was measured at over 400 inches. Archery tags are available every year, while rifle tags are available through the Montana limited draw system. Along with trophy elk, trophy whitetail deer, mule deer and Merriam’s turkeys are abundant on the ranch.Aesthetically the property has a classic Montana ranch feel. It offers a pleasant contrast to the more traditional alpine scenery sought after by “out of staters”. Its sandstone outcroppings amongst the scattered pine foothills offer a pleasing, if not dramatic, setting. It is wonderful riding and hiking country. On a ranch of this size, one can ride or walk for miles and never leave one’s own boundaries.

The ranch has been operated as part of a larger cattle operation with wildlife in mind. Therefore, the owner has implemented a low impact agricultural operation. Up until this year, the ranch has utilized its grass as pasture for an ongoing cow/calf operation, but due to last year’s drought conditions the owners have chosen not to graze the ranch this season. In a typical year the cattle will graze on the old “rank” feed which allows the elk and deer to forage the new growth, a practice consistent with managing big game habitat. The ranch could likely handle 160 head for five months and at a rate of $25 aum, the ranch has the potential to generate approximately $20,000 a year. 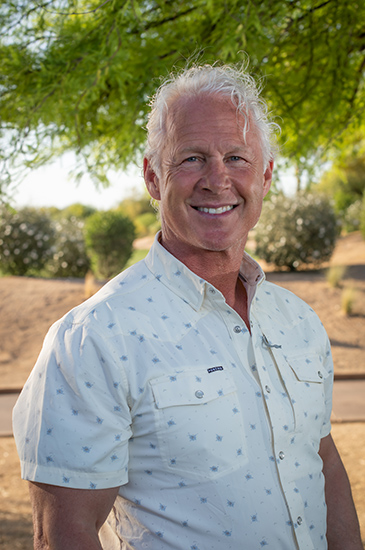 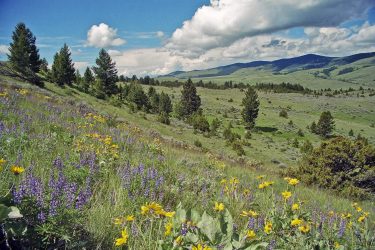 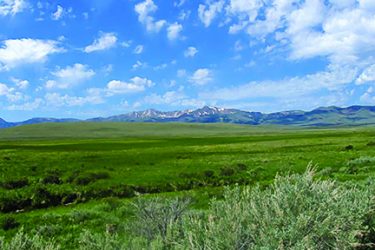 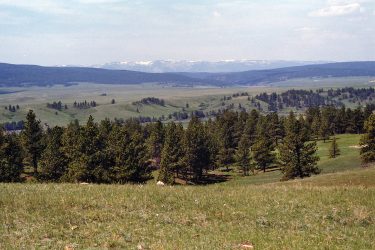 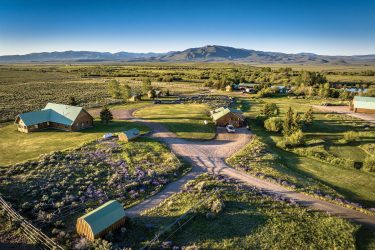