Lower Sawmill Creek Ranch is a quality wilderness ranch that represents excellent value. The property is highlighted by its exceptional mountain valley setting and a mile of a very private freestone stream supporting a rainbow trout fishery that anglers of all skill levels will enjoy. The ranch features a turn-key cabin that affords comfortable, off-the-grid living and plenty of storage for vehicles and ranch equipment.

Trent came to Hall and Hall in the spring of 2003 after spending eight years with The Idaho Nature Conservancy where, as Lands Program Director, he was responsible for overseeing the chapter’s real estate activity around the state. Trent also served as the Conservancy’s field representative for central Idaho where he worked with local communities and landowners to preserve working ranchlands and resolve natural resource conflicts. He became a partner of Hall and Hall in March 2004 and holds real estate licenses in Idaho, Montana, Oregon, Nevada, North Carolina, South Carolina, and Virginia. A native of Virginia, Trent graduated from Woodberry Forest School and earned his Bachelor of Arts degree in history from Hampden-Sydney College. Trent and his wife, Cecile, moved west to Idaho in 1994. Enjoyment of the outdoors is evident in Trent’s dedication to fly-fishing and upland bird hunting. Trent maintains strong ties to the southeast and is a trustee of The Duke Endowment based in Charlotte, NC and a committee member of the Josiah Charles Trent Memorial Foundation in Durham, NC. He is past president of the board of directors for the Wood River Land Trust and was an original board member of the Blaine County Land, Water, and Wildlife Program. Trent and Cecile have two children, a son Parker and a daughter Airey.

Lower Sawmill Creek Ranch consists of 149± deeded acres surrounded by the Salmon-Challis National Forest. Access is by seasonal gravel road. Sawmill Creek flows for approximately one mile through the property and supports a robust wild rainbow trout fishery. The ranch features a comfortable two-bedroom cabin with a kitchen, bathroom, living area, and an adjacent two-car garage. The adjoining national forest lands provide miles of hiking, horseback riding, big game hunting, ATV riding, and other backcountry pursuits. The area is rich in wildlife and home to elk, mule deer, mountain goat, moose, antelope, and upland game birds. The ranch is situated between Sun Valley, Idaho and Jackson Hole, Wyoming, within easy reach of either community. Idaho Falls and its commercial airport lie approximately two hours southeast of the property, while Salt Lake City is four hours to the south.

Lower Sawmill Creek Ranch was originally homesteaded by a local settler in 1916 and represents one of only two private parcels in the Sawmill Creek Valley. The balance of the valley is in federal ownership and managed almost entirely by the Salmon-Challis National Forest. The property lies on the northeast side of Bear Mountain, a sprawling series of ridgelines and canyons that rise to almost 11,000 feet and separate Sawmill Canyon from the upper Little Lost Valley. Sawmill Canyon Road lies along the east boundary the property and continues up the canyon until culminating in a series of unimproved logging roads and mining trails. The granite peaks of the Lemhi Range lie east of the ranch and provide a spectacular backdrop. The ranch features a wonderful mix of open meadow, stands of aspen and cottonwood, and rafts of willow and river birch through which Sawmill Creek flows. The ranch is perimeter fenced and suitable for pasturing horses and cattle. A sturdy vehicle bridge in the center of the ranch links both sides of Sawmill Creek.

Lower Sawmill Creek Ranch is a quality wilderness ranch that represents excellent value. The property is highlighted by its exceptional mountain valley setting and a mile of a very private freestone stream supporting a rainbow trout fishery that anglers of all skill levels will enjoy. The ranch features a turn-key cabin that affords comfortable, off-the-grid living and plenty of storage for vehicles and ranch equipment.

Lower Sawmill Creek Ranch is located within Sawmill Canyon in central Idaho’s upper Little Lost Valley approximately two hours west of the popular resort community of Sun Valley and two hours north of the city of Idaho Falls. Friedman Memorial Airport in Hailey, 15 miles south of Sun Valley, offers regular commercial air service on Delta, United, and Alaska Airlines. Idaho Falls provides alternate commercial air service out of Idaho Falls Regional Airport on Delta and United. Vehicular access to the property is via the Little Lost Road, an all-season, gravel county road that bisects the valley, and Sawmill Canyon Road, a seasonal, secondary road that links the ranch and Sawmill Canyon with the rest of the valley. As mountain snowfall begins to accumulate late in the year, Sawmill Canyon Road closes until spring and access to the property is limited to snow machine. The town of Mackay, 40 miles west of the ranch, offers a runway capable of handling larger twin-engine aircraft, while the community of Arco, 65 miles southwest of the property, is home to a lighted runway suitable for most jet aircraft. There is also potential to develop an airstrip on the property for light, backcountry aircraft

The Little Lost Valley lies in the heart of Idaho’s “big sky” country and encompasses one of the state’s most scenic areas. The massive Lemhi and Lost River Ranges – Idaho’s highest mountain chains – flank the valley and run for over 75 miles before ending near the Salmon River to the north. These two ranges boast eight of Idaho’s ten peaks over 12,000 feet, including Mt. Borah, the state’s highest at 12,662 feet, and provide spectacular views along with numerous backcountry recreation opportunities. The Little Lost River flows the length of the valley and provides irrigation water for the valley’s many farms and ranches, along with wildlife habitat and trout fishing opportunities, before disappearing into the basalt lava flows further south on the Snake River Plain. The majority of the land base in the valley is in federal and state ownership with the largest percentage of private lands situated around the small agricultural hamlet of Howe, 45 miles south of the ranch.

The property spans Custer and Lemhi Counties, which are among Idaho’s largest counties covering an area of nearly 10,000 square miles. Despite their size, they are two of the state’s least populated counties with a combined population of around 12,500 residents. The recorded history of the area begins with fur traders and pathfinders traveling through the region as early as 1824, and prospectors and miners arriving in the 1860s and 1870s. The principle industry is cattle ranching with livestock operations often stretching back multiple generations. The mining and timber industries have also played important roles over time. More recently, tourism and outdoor recreation have emerged as important components to the local economy by capitalizing on the area’s natural beauty, diverse recreation resources, and low-key lifestyle.

The elevation of the property is approximately 6,600 feet. Summer temperatures at this altitude are idyllic with highs reaching the 80s and then cooling to the mid-40s at night. Winters are cold with snowfall varying depending on annual moisture patterns.

The ranch features a very comfortable and well-maintained two-bedroom cabin with a kitchen, bathroom, living area, and an adjacent two-car garage. The cabin is serviced by a domestic well, septic system, and reliable, easy-to-use solar-powered electrical system with back-up propane generators. The cabin is being offered furnished. A second garage/storage building with a bathroom is located in a secluded aspen grove on the west side of Sawmill Creek within an area that would serve as an excellent homesite. This structure has a concrete floor and is serviced by a domestic well and septic system.

All mineral and subsurface rights owned by the Seller will transfer to the new owner at closing.

The cold, clean waters of Sawmill Creek originate high in the mountains above the ranch and flow for approximately one mile through the property and a lush riparian corridor of aspen and willow. Sawmill Creek is home to a lively trout fishery with wild rainbow as well as an isolated population of native bull trout that thrives in the creek’s upper reaches. Perfect for fly anglers of all skill levels, Sawmill Creek is an intimate and inviting freestone stream that offers a trout-filled pool, riffle, or undercut bank around every turn. In addition, Sawmill Creek is one of the main tributaries to the Little Lost River, and expanded fishing opportunities exist a short distance from the ranch on the Little Lost as well as on other key tributaries such as Summit Creek and Wet Creek.

An abundance of wildlife uses the surrounding mountains, foothills, forests, and grasslands throughout the year. Elk, mule deer, and antelope can be found browsing and grazing on the hillsides, while moose wander creek drainages and riparian areas. Chukar partridge are plentiful on ridgelines and rock outcroppings, and blue grouse and sage grouse utilize the area’s springs and abundant sage steppe habitat. Ducks and geese remain in the area until frozen water pushes birds further south, although numerous warm springs and spring creeks often remain open through the winter, providing year-round open water. A multitude of non-game birds and mammals are found in the valley as well. The ranch is located in Idaho hunt unit 51 and the Lemhi elk zone. 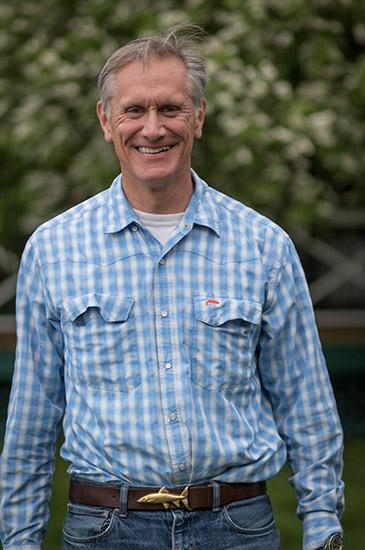 Year-round 450± head operating ranch on upper Reynolds Creek with 2,826± deeded acres and a BLM grazing permit stretching from the Snake River to the Owyhee Mountains. Located 55 miles from Boise.